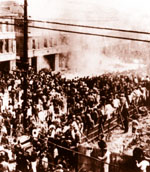 On the morning of February 28, 1947,
people in Taipei surround the Taipei
Branch of the Monopoly Bureau.

The 228 Incident, which occurred less than a year and a half after Retrocession, started out with anti-smuggling personnel and military police units, because anti-tobacco smuggling units dealt with a case inappropriately, which led to a petition by the people of Taipei to demonstrate on February 28, and a strike by industrial workers and storekeepers. And because on that day government guards shot at the petitioning crowds, the confusion could not be contained, and so the petition to punish the murders turned into a fight against the  government, and went on to become a conflict between the people of Taiwan and the mainlanders. The resistance and conflict immediately spread throughout the entire island, making what was originally just a public security incident into a political movement. Local leaders took the opportunity to demand all-out reform, and because some areas were armed with military and police weapons, armed conflict ensued. This transformed the face of Taiwan’s politics, economics, society and culture in the immediate postwar period, foreshadowing what was to come after 228. The 228 Incident’s subsequent influence on all of Taiwan has been deep and serious, and because today is 228 Remembrance Day, we have invited Professor Li Hsiao-feng of Shih Hsin University to write an account of the 228 Incident, and its effects, and to look at the influence it has had on the psyche of the Taiwanese people.

Illusions of the “fatherland” shattered

After the end of the Second World War, the people of Taiwan had shaken off the Japanese colonial government and were hoping that they could put their hope in China on the other side of the Taiwan Strait, and they welcomed what they saw as the “fatherland” with open arms. They never dreamt that after the real China arrived in Taiwan, they would discover that this China was very different from the image of the “fatherland” they had held
in their minds, and it was difficult to adjust.

Riding roughshod over Taiwan with the mentality of “conquerors”

The newly-arrived Chinese regime rode roughshod over Taiwan with the mentality of conquerors. First, disregarding the fact that the people of Taiwan had earlier in their history pursued democratic autonomy, and instead set up a system of “Taiwan Provincial Governor’s Office” no different from the Japanese governor-general system, which gathered together the major authorities – administrative, legislative, judicial and military – into one body, exactly as if they were carrying on Japanese colonial rule. In the new colonial system of the Taiwan  Provincial Governor’s Office, the mainlanders monopolized power and position, and favored their friends and relatives, put outsiders in specialist positions, and instead of taking over responsibility for Taiwan, they plundered it. Officialdom became rife with corruption, and immediately the Taiwanese people’s eyes were opened to a reality to which they had been blind for fifty years.

Life becomes impossible A total monopoly on was rigorously enforced onmanaging the economy. Governor General Chen Yi,vaunted “national socialism” in view of theoutstanding results of the Japanese-era monopolysystem, and consequently, despite the KMT’s ownpolitical culture and official abuses, began tofollow this practice without exception. Camphor,matches, alcohol, tobacco, and measuringinstruments were all sucked into the monopoly.Apart from this, there were still many everydaynecessities which were strictly dominated bybodies outside of the Alcohol and TobaccoMonopoly Bureau, no matter whether they werecommunications, transport, warehouses,agricultural products, fisheries and pasturage,iron and steel, electricity, cement, mechanizedmanufacturing, petroleum, engineering, papermills, printing, textile industries, bricks andtiles, oil, electrical equipment, chemicals,salt industry – every last one of these wasunder their control. If the controlled economyhad been practiced according to principle, itwould not necessarily have been undesirable.But it so happened that under this officialculture where bribes could bring you anythingyou wanted, officials and businessmencollaborated, or else officials werethemselves businessmen, with the result thatmany illicit imports and exports were freelytraded, and both officials and businessmen madevast profits from this. This controlled economicsystem was accompanied a culture of corruption,and the disaster it brought Taiwan was extremelyevident. The rice shortages in particularcreated incredible hardship in everyday life,and social unrest was very clear. But the riceshortages were due not only to the enforcedsupport in Taiwan of KMT troops to meet theneeds of the civil war between the KMT and theCCP in China, but also to official-merchantcollaboration to hoard rice for marketspeculation, and artificial price hikes,which led to rice shortages. Looking at theinflation in retail rice prices in Taipei Cityfrom the end of the Second World War until justbefore the 228 Incident, in 16 months, retailrice prices in Taipei City shot up 400-fold.Taiwan’s wealth was systematically plundered,and the 237 privately- and publicly-ownedenterprises left behind by the Japanese, andover 600 government units, were completelyabsorbed into the 27 companies set up and runby the various offices of the Taiwan ProvincialGovernor’s Office’s. On top of this, the placingof outsiders into specialist positions, andincomplete planning led to a huge fall inproductivity, and the production index for thefirst year following the end of the war was lessthan half of pre-war annual productivity, andcompared to the pre-war period, the Taiwanesepeople no longer had enough to live on. Theunemployment figures soared, and of Taiwan’spopulation of over 6 million, there were a record400 to 800 thousand out of work.

Taiwan was overrun with thieves,and military police discipline was a corruptshambles. Apart from petty pilfering, manymilitary personnel from mainland China werealso dishonest, deceived and intimidated,molested women, robbed, killed…they stoppedat nothing, they insulted and harassed people,abused their power, like a bunch of bandits onthe rampage, and caused deep and bitterresentment among the ordinary people of Taiwan.In 1946, Taiwan society was already in upheaval,and cases of soldiers opening fire, stirring uptrouble and clashing with ordinary people werenothing out of the ordinary. As a result, in thesecond year after the KMT government took overcontrol of Taiwan, social unrest took a seriousturn for the worse, and in the space of a year,criminal cases increased 28 fold.

The Eruption of the 228 Incident In sum, after a year and a half ofdevastation and plunder, Taiwan society

waspushed back thirty or forty years. As aresult, 16 months of so-called “Retrocession”culminated in the eruption of the 228Incident. On the evening of February 27, 1947,an agent from the Alcohol and Tobacco MonopolyBureau struck and injured a woman illegallypeddling tobacco on Yenping Road in TaipeiCity, and this led to another member of thepublic being shot and killed. On February 28,citizens of Taipei protested to the relevantorganizations to no avail, in fact they metwith machine-gun fire from the Governor’sOffice. Once the situation had broken out,it was hard to contain, and it spread acrossthe island, as people rose up in every placeand rioted all across Taiwan. The developmentof the Incident proceeded along two main lines:one was armed resistance, the other waspolitical negotiating. The former manifesteditself in the appearance of armed militiamenin every town and city, carrying out attackson police and military bodies; the latter wasthe organization of popular representativesand local gentry into a “February 28 IncidentSettlement Committee” who negotiated withGovernor Chen Yi about dealing with theproblems arising from the Incident, andalso went further to bring up demands forpolitical reform. With the negotiations andmediation of the “February 28 IncidentSettlement Committee”, the situation graduallybegan to stabilize, but Chen Yi paid no morethan lip service to the suggestions of theCommittee concerning political reform. Heannounced that if the populace had anysuggestions, they should make them to theCommittee, and he would do his best toaccommodate them, but he also sent a telegramto the central government in Nanjing askingfor troops to be sent to Taiwan. The KMTgovernment leader, Chiang Kai-shek, wasreceptive to the one-sided statements ofmilitary special agents stationed inTaiwan and hastily sent troops to Taiwan.On March 8, the KMT troops arrived inTaiwan, and began to a quelling whichturned into a massacre, and continued as whatbecame known as “country sweeping,” anisland-wide program of arrest and slaughter.The elite of Taiwanese society was sacrificedalmost in its entirety, and there were heavycivilian casualties, with a death tollsomewhere between 10,000 to 20,000.

Sowing the seeds of ‘black gold’ politicsThe 228 Incident not only destroyedTaiwanese families with death and tragedy,but also had a huge influence on the futurepolitics and society of Taiwan. On one hand,the character of the Taiwanese people wasseverely distorted: in the past they hadbeen colonized by foreign rule, but nowthey were even more lowly and humiliatedthan before, and began to show slave-likepersonalities which sought only their ownsafety and protection, and didn’t dare defythe rulers. On the other hand, the peopleof Taiwan were terrified of, disheartenedby and disappointed in politics. This fearand lethargy towards politics helped theKMT’s one-party dictatorship, but not thedevelopment of democratic, constitutionalgovernment. Furthermore, Taiwanese societywas now devoid of people with leadershipcaliber, which was convenient for KMTpolitics. Many of the surviving membersof the social elite were unwilling to getinvolved in politics again, theconstitution of local politics changed,the bad chased out the good, and corruptlocal gentry and criminal elements alongwith local politicians gradually began todominate the local political world. Theseeds of Taiwan’s “black gold” politicswere sown in the aftermath of the 228Incident.

Heartfelt education and inspirationReflecting on the past in the light of thepresent, the history of the 228 Incidentis both deeply educational and inspiring:the so-called “Taiwan Retrocession” of 1945was the first “unification” of Taiwan andChina. The 228 Incident of 1947 was the”sequel” of this “unification.” A crucialfactor leading to this reaction lies inthe fact that the difference betweenTaiwanese and Chinese society was too great,and their constitutions too different, andso they did not adapt well to one another.This unsuitability could represent thecyclical process of repression and resistanceproduced by the fact that the side with lowerpolitical cultural standards ruled the sidewith higher political and cultural standardshigher on the other, so the repression andresistance produced were part of a cyclicalprocess. Today, the PRC on the mainland istoo distant from Taiwan, and too far behindin everything, be it political system, socialstructure, legal system, cultural content,lifestyle values or human rights indices. IfTaiwan is “unified” again, there is a realconcern that the 228 Incident will be replayed!Can Taiwan’s inhabitants predict the futurefrom the past and present?