保釣運動的回顧與反思
Reflections on the Diaoyutai Movement 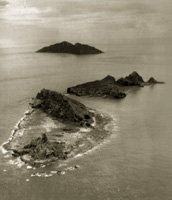 1975 Bird’s eye view of the Diaoyutai

In 1969, a report by the UN Economic Commission for Asia and the Far East (ECAFE) indicated the possibility of large reserves of oil in the vicinity of the Diaoyutai Archipelago. To everybody’s surprise, this report set of a political dispute between Taiwan, China and Japan which has been going on now for over thirty years. The topic of oil exploration has been completely ignored, even forgotten. But the fight for sovereignty of the Diaoyutai, even to the extent of debating Taiwan’s international position and legitimacy, has been continuously examined and contended, with some people even advocating a United People’s Republic of China, or so-called Overseas Chinese, fighting together for the sovereignty of the Diaoyutai, and the phenomenon of a confused national identity has not advanced much in the past thirty-odd years. This week, we have invited Professor Hsueh Hua-yuen of the history department of National Chengchi University to write an analysis of this historical even, the follow-up, and its influence.

The incident and its legacy

On April 9, 1971, the U.S. State Department issued a statement that President Nixon and Japanese Prime Minister Sato Eisaku had reached an agreement, by which the U.S. would return Okinawa and the “South-western islands” which included the Diaoyutai [Senkaku in Japanese], to Japan, in 1972. This action provoked an intense reaction from Taiwan society (particularly among university students), and demonstrations from the Taiwanese community and overseas Taiwanese students in the U.S., and launched the Diaoyutai Movement both at home and abroad. The influence of this movement saw the appearance not only of a change of direction in national allegiance in intellectual circles outside Taiwan; even within Taiwan, there are still frequent calls to fight for sovereignty of the Diaoyutai. Today, looking back at this period in history thirty years ago, we can see that the attitude of those in power, and the contents of education in Taiwan at that time, led to confusion over national identity, and the cause of the growth of detrimental factors in the Diaoyutai Movement to the direction of the development of Taiwan’s national sovereignty.

Voices of protest rise up in Taiwan and abroad

In fact, as early as September 1970, the then-premier, C.K. Yen, publicly expressed that, regarding the Diaoyutai issue, the R.O.C. was determined to preserve the interests it ought to have in the Diaoyutai Archipelago, and the Taiwan Provincial Assembly also passed a motion demanding that the government preserve the sovereignty of the Diaoyutai. After the U.S.-Japanese agreement, Taiwan not only made a statement through a spokesman of the Ministry of Foreign Affairs, expressing Taiwan’s determination to oppose this, and on April 14, students from National Chengchi University held a demonstration on campus, and a symposium, and students headed by a group from National Taiwan University (NTU) delivered a letter of protest to the Japanese embassy, and formally opened the prologue to the Diaoyutai Movement. On June 17, 12 hours before the U.S. and Japan formally signed the official documents transferring the U.S. Armed Forces-occupied territory of the Ryukyu Islands, including the Diaoyutai chain, another protest demonstration broke out in Taipei, led by students from NTU, and protest letters were handed over to the U.S. and Japanese embassies respectively.

However, this was just the first episode in the Diaoyutai Movement inside and outside Taiwan, which was largely led by Taiwanese students studying in the U.S., who, because of their dissatisfaction with the U.S. handing the Diaoyutai chain, carried out large-scale link-ups and protest activities, and grew into the crescendo of the Diaoyutai Movement. But the resolve, actions and achievements of the R.O.C. government were not able to persuade a large number of intellectuals both here and abroad, particularly those students and residents in the U.S. who came up with their own series of Diaoyutai Movement activities, in face of the government’s inability to reverse the situation. With the PRC using nationalism as an appeal, the political position changed, and some people even went so far as to return to mainland China, putting the R.O.C., which had already encountered a string of frustrating setbacks on the international stage, under even more pressure. Looking back at this period, we see that the Diaoyutai Movement was not simply a reaction of fierce dissatisfaction by people in Taiwan to the way in which the U.S. and Japan were dealing with the Diaoyutai incident. It was also because the R.O.C. government of the time didn’t have the strength to reverse this international reality, and on top of this, the PRC was making loud nationalistic noises, which led to overseas students from Taiwan making significant changes in their political position. 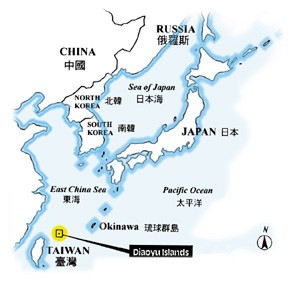 We can identify many basic problems. First, after the Diaoyutai movement took shape, politics shifted direction because at that time, national identity in Taiwan was very unclear (and is, in fact, to this day), and so although people were appealing to nationalism, the national identity of this particular brand of nationalism was very confused. This meant that the wave of nationalism which rose up in the wake of the Diaoyutai Movement evolved into a new direction of national identity with the PRC (of course this also included a number of people within Taiwan). Thirty years later, there are still people in Taiwan who continue to participate in or start up actions to protect the sovereignty of the Diaoyutai, but with the same phenomenon of mixed up national identity as thirty years ago, to the extent that they prefer to cooperate with the PRC as an symbol of their wish to defend the Diaoyutai. Naturally, there is plenty of latitude for discussion over whether or not they are really safeguarding the interests of national sovereignty in this way. In other words, the Diaoyutai Movement had already caused a certain degree of harm to the R.O.C. government, but thirty years on, the current government has yet to come up with a forceful way to deal with this.

As for the formation of the historical factors behind the sovereignty of the Diaoyutai, the most important one was the acceptance of Japanese territories after the Second World War. Originally, during the Japanese occupation of Taiwan, the Diaoyutai Archipelago came under the jurisdiction of Taipei Prefecture. After the close of the Second World War, when U.S. troops were stationed on the Ryukyu and Diaoyutai Archipelagoes, the KMT government which had received Taiwan did not immediately demand that that the U.S. give them sovereignty, until it was discovered that there might be huge reserves of oil in the region of the Diaoyutai Archipelago. Its importance only then became apparent, and it was only when the U.S. and Japan then held talks to discuss the issue of handing the Ryukyu Archipelago back that the dispute over sovereignty formally surfaced. During this process, the R.O.C. government’s detached attitude towards sovereignty of the Diaoyutai came to the fore, and it wasn’t until the 1970s that there was officially controversy over the sovereignty of the Diaoyutai. Even so, if we go a step further and make an analysis, we find that it is not just the government’s past attitude towards the Diaoyutai; even the present government has yet to make appropriate preparations in answering the dispute over the Diaoyutai and their sovereignty, particularly in dealing with the sovereignty pronouncements of the PRC. So, there is not only the possibility that the original problem of national identity with Taiwan will continue: under its influence, it’s quite possible this will cause the government to make the wrong reactions to this problem.

Geographical and historical connections between Taiwan and the Tiaoyutai

Defending national sovereignty or causing the nation to lose its sovereignty?Obviously, the dispute over sovereignty of the Diaoyutai is limited to international realities, and it cannot be solved by resorting to arms, and it will require long, drawn-out stands being made on the international stage before a relatively reasonable solution can be reached. However, if this issue becomes an issue between Japan and the PRC, then it will fundamentally not fit in with Taiwan’s national interests, nor the facts of history. As far as the geographical and historical connections are concerned, the Diaoyutai Archipelago, the key question is, in the final analysis, whether the Diaoyutai should be attached to the Ryukyu Archipelago or Taiwan. And conversely, whatever demands China makes arguing that it owns the Diaoyutai, or if the United People’s Republic of China or the so-called overseas Chinese fight for sovereignty of the Diaoyutai, their prerequisite is that Taiwan is a part of the PRC, and the PRC has the right to represent Taiwan’s foreign sovereignty struggles. In this way, in the end, is it defending national sovereignty or making the nation lose sovereignty? This is a weighty question for Taiwan’s position and its rights and interests. Looking back over this thirty-year long dispute over the Diaoyutai, it is imperative that the government and the people of Taiwan clear up the essence of whose authority the Diaoyutai should come under, otherwise a rash choice could influence the country’s long-term development: this is worth taking seriously.