The Dragon Boat Festival on the fifth day of the fifth month in Taiwan’s lunar calendar, the Tomb Sweeping Festival and the Mid-Autumn Festival are Taiwan’s three biggest festivals. Every year, the government and ordinary people alike hold folk activities and eat special festival foods to make these days special and lively. However, although many people will eat zongzi and watch dragon boat racing, most of us know little about the historical background of this festival apart from the story of Qu Yuan throwing himself into the river back in the Warring States period. That’s why Taiwan News has this week invited Tai Pao-tsun, professor from the history department at National Central University, to write about our weekly feature, Window on Taiwan, on the historical allusions connected with the Dragon Boat Festival, and the related folk festivities and activities . 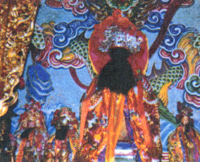 Some legends about the origins of the Dragon Boat Festival

The fifth day of the fifth month of Taiwan’s lunar calendar is the “Festival of the Fifth” or “Dragon Boat Festival.” This period is the time when spring weather is replaced by that of summer, and the fifth month is often called “poison month,” and several folk customs have arisen to drive out evil spirits, keep poison at bay and stay healthy and safe. There are numerous stories about the origin of the Fifth Month Festival. One says that it commemorates Qu Yuan, the poet from the state of Chu who committed suicide by drowning in ancient China, and people offer sacrifices to him by plunging zongzi made of rice wrapped in bamboo leaves into water; another says that it commemorates the filial daughter, Cao E, from the Eastern Han dynasty. Because her father had drowned in a river, Cao E walked along the river’s edge for 17 days, crying her eyes out and looking for her father’s body, but she never found it, and so she threw herself into the river and drowned herself. After five days, on the fifth day of the fifth month, the bodies of father and daughter came to the surface, intertwined, and people were so moved by her filial behavior that they memorialized her by making sacrifices to her. Yet another story tells that in the Spring and Autumn period in China [722 to 481 B.C.], in the state of Wu, the famous courtier, Wu Zixu, helped the state of Wu to attack and win a great victory over the state of Yue. He advocated war to destroy Yue, but the king of Wu did not heed him, but instead ordered him to commit suicide, and on the fifth day of the fifth month, his body was thrown into the river. Later on, people commemorated Wu Zixu on this day. Among these legends, the story of Qu Yuan is he most widely known. In the Chou Mei ward of Shihlin District, Taipei City, there is a temple dedicated to Qu Yuan, and around the Dragon Boat Festival, many devotees come to the temple to offer sacrifices to Qu Yuan. In conclusion, the festival of the Fifth Day is closely tied up with rivers, and dragon boat races have become the most important water-related activity, while zongzi is the food of choice for the festival, and there are also some luck-seeking behaviors and activities to ward away evil spirits. This day is also a festival for poets, and traditionally, poets gather together on this day to recite poems and celebrate. It’s a very vibrant and busy festival in Taiwan’s calendar.

On the fifth day of the fifth month, in order to ward off evil spirits, people hang branches of moxa, calamus and banyan around the doors of their homes, in the hope that this will drive away evil spirits and keep everyone healthy. Drinking realgar wine can also drive away the evil spirits, as can sprinkling realgar in all four corners of the house to get rid of insects. Parents may make scented sachets stuffed with fragrant material and hang these around their children’s necks to protect their children and bless them with a safe passage into adulthood, and also organize games where children must try to balance an egg on its end. It’s also said that water drawn at 12 noon on the fifth day of the fifth month will stay fresh for longer than usual, and can also be used to treat many illnesses. Water drawn at noon from the “Sword Well” at Tie Chen Hill (“Anvil Hill”), Tachia (Taichung County) is the most famous. The story of the Sword Well at Tie Chen Shan says that when Koxinga was leading his army north, they ran out of water here, and Koxinga pulled out his sword and plunged it into the ground, and prayed for water to spring forth. And of course he hit an underground source of water which gushed out, and rescued his troops from the danger of dehydration. That’s why the Sword Well is there on Tie Chen Hill, and the water has never dried up. Legend has it that that day was the day of the Dragon Boat Festival, so the local people go there to draw water at noon on the fifth day of the fifth month, and it’s one of the particularly interesting folk activities of central Taiwan.

The evolution and symbolic meaning of zongzi

The seasonal food for the Dragon Boat Festival is zongzi, the origins of which are to be found with Qu Yuan. After his suicide, somebody ran into his ghost, which said that although he had drowned in the river, his soul did not die, and the food people threw into the river was mostly eaten by the fish, and he would like people to put rice in bamboo tubs from now on, so that he could eat it. Later on, the custom changed and the food became zongzi wrapped up in bamboo leaves, which were tossed into the water as offerings to Qu Yuan. Zongzi in Taiwan can be divided into two flavors: salty and alkaline. There are many different regional styles, such as Taiwanese, Guangdong and Zhejiang, which show the rich variety of food to be found in Taiwan. This time of year is also close to graduations and entrance exams for all levels of schools, and the expression “bao zongzi” (wrapping up zongzi) can have the meaning of “bao zhong” which means to pass one’s exams, so the zongzi is not just food but also has a symbolic meaning of praying for examination success.

Activities on the water for the Dragon Boat Festival: dragon boat racing

The most important activity of the Dragon Boat Festival is the dragon boat racing. According to legend, this too is connected with the story of Qu Yuan. It’s said that after Qu Yuan killed himself, people paddled boats looking for him, and saw a dragon flying over the river. From that time on, dragon heads were carved onto the prows of search boats, and dragon tails at the other end, with dragon’s scales painted along the length of the boat, so that they became what were called “dragon boats.” Actually these are all myths, and the dragon boat races were a traditional folk waterways activity in Southern China and Southeast Asia. On the day of the Dragon Boat Festival, grand dragon boat races will be held all over Taiwan, in Ilan, Keelung, Taipei, Lukang, Tainan and Kaohsiung, a major annual water activity. Taiwan is an island nation, and the dragon boat races are certainly activities well worth promoting.

Taipei City holds dragon boat races on a grand scale, and the Hsintien team from upstream on the Tamshui river is well-matched with the team from downstream Kuantu. They compete for a long time, and both have victories and defeats. The Taipei dragon boat racing has now developed into an international competition. In the past, all the races were held on the Tamshui river, and there are often performance activities or live TV broadcasts being carried out at the same time, adding to the festival atmosphere. At Wanli Township in Taipei County, dragon boat races are even held in the sea, on a nerve-wracking and wonderful course. The dragon boat races at Er Lung Village, in Chiaohsi Township, Ilan County, are famous for their special traditions, and are even noted by the Tourism Bureau as a tourist attraction.

The dragon boat races at Er Lung Village have always been held between two teams only, the Chiwulan team from upper Er Lung, and the Choutzuwei team from lower Er Lung. The Chiwulan dragon boat has a green background, and the Choutzuwei dragon boat has a red background. The two teams race up and down the Er Lung river dozens of times, and the villagers take it in turns to participate until the early evening, and the winner is finally calculated from the number of victories and defeats by both teams. This custom is said to come from the river-worshipping ceremony of the Kavalan people, who are one of the Aboriginal Pingpu tribes, and when Han Chinese began to develop and exploit the land of Ilan in large numbers, this ceremony gradually turned into a dragon boat race.

Activities to ward off sickness: the vanished custom of rock battles

The Dragon Boat Festival marks the end of spring and the beginning of summer, and in the past, Taiwan was rife with infectious diseases, and so ceremonies would be carried out to ward off sickness and pray for health. There still exist folk customs where during the Dragon Boat Festival, people would fight each other by throwing rocks, and thanks to the vigorous exercise, the participants would sweat heavily and thus avoid disease. This was recorded by the Japanese about 70 years ago: people in the area which is now the Pingtung villages of Chiatung, Linpien, Shinpi and Fangliao would group together on the fifth day of the fifth month and go out into the fields or the meadows, and fight by throwing stones at one another. The men’s job was to throw the stones, and the women’s job was to collect stones for the fights. Each side threw stones at the other, but they didn’t come into physical contact, and the more stones they threw, the better, and the side which held out the longest was the winner, and was allowed to eat delicious dishes prepared by the losing side. If the losing side was taken captive and humiliated, or punished, they were not allowed to resist. It is said that one time, malaria was going around, and when the villagers participated in the rock fight, their sweating from the vigorous exercise rid their bodies of fever, and they actually made a full recovery from this infectious disease, upon which the practice of rock battles became even more prevalent. However, it would occasionally happen that someone got hurt, or damaged another’s house or property, and the Japanese saw this as an undesirable activity which had a detrimental effect on public order, and enforced a ban on it. Or it may be that the sport had a habit of turning into fights. Anyway, these rock fights gradually began to die out during the Japanese Occupation.