木柵茶史
The history of Mucha and tea

Famous for its “tie kuanyin” variety of oolong tea, the Mucha Tea Park is Taiwan’s first sightseeing tea park. Back in the 1770s, Chinese immigrants from tea-growing villages in Anxi, Fujian Province, brought tea plants to Taiwan and began to develop the land. Mucha, with its hilly topography and favorable drainage had all the right conditions to be a good tea-growing area, but because the region was fairly remote and the tea farmers were not familiar with the workings of the market, the trade in tea leaves saw many ebbs and flows over the generations. Fast forward to December 1980, when Taipei City Mayor Lee Teng-hui set up the Sightseeing Tea Park, and the tea trade, by then in decline, was given a new lease of life. This week, Window on Taiwan is written by Wen Chen-hua, a professor from National Taiwan Normal University’s History Department, who gives a detailed history of the rise and fall of Mucha tea during the last two hundred years, and tells us about business today in the Mucha Sightseeing Tea Park.

Mucha, particularly Maokung, is a popular hangout for Taipei’s “night cats.” Although tea growing around the Mucha area has had a fairly long history, it’s only been a place to go and drink tea by night for the last twenty years. Mucha is very hilly, providing a good environment for tea bushes to mature. There have been four main stages in the history of tea production at Mucha.

Before the arrival of the Chinese, the hills of Mucha belonged to the Luilang Ketagalan tribe. Around the 1770s, Han Chinese started to arrive from their hometowns in Anxi County, Fujian Province, China, and began to develop the land. Anxi County is a tea-growing region of China, and so when immigrants from Anxi arrived in Taiwan, some of them brought tea plants with them. Mr. Chang Mei-chia says that his ancestors grew tea in Anxi, and came to Taiwan carrying tea plants. They first developed tea cultivation in the Shihlin area, but having no success, they then discovered that Mucha was suitable for tea growing, and so they moved there. It’s possible to hear many tales of similar experience among immigrants from old people in the Mucha area.

Although Mucha was suitable for growing tea bushes, tea production and the tea trade ran into many problems. For instance, production techniques, or marketing channels, and price fluctuation all hindered tea production in the early days, and so there wasn’t a great deal of development. On the contrary, because there were more profits to be made from indigo, the hills were planted with indigo plants for the production of indigo dye.

The age of the Western tea companies

In 1860, because of the Qing court’s defeat in the second Opium War, the mouth of the Tamshui River in Taiwan was opened up as a commercial port for foreign trade, and as economic activity ensued, Taiwan was brought into the global economic system. Westerners poured into Taiwan looking for trading opportunities. At that time, the British consul stationed at Tamshui, Robert Swinhoe, sent some Mucha tea back to Britain to be tested. He received the reply that the tea production process was poor. Later on, a British merchant by the name of John Dodd promoted the development of tea production in Taiwan. He investigated the cultivation of tea bushes in the Wenshan District and the possibility of development.

Tea was greatly in demand in the world market at that time, and exports of tea from Xiamen, Fujiian and Hankou in China were on the wane. Dodd grasped this opportunity, and in 1866 he imported tea plants, planted them around Mucha, and he bought all the harvested tea, giving farmers the confidence to grow tea. In order to improve the quality of tea production, Dodd invested in new tea production equipment. In 1869, brand-name tea was exported out of Tamshui, and transported for sale in America, where it became popular. Western merchants saw the tea trade as very profitable, and many of them came to Taiwan to invest in it. The better known companies were Dodd & Co., Tait & Co., Ellas & Co., Brown & Co. and Boyd & Co.

Because of the profits to be made from tea, and the loans which Western companies gave to the tea growers, the area planted with tea bushes expanded rapidly. In 1877, a Westerner gave a description of Ta Tao Cheng as follows: “I look around and see fires blazing on the hills that surround the basin. The farmers are currently clearing the trees and foliage away, preparing the land for tea planting.” In this way, the Mucha hills had their indigo plants removed, and the land was given over to tea bushes. The land which had not been developed was also planted all over with tea bushes. This was the golden age for tea production in Mucha.

Because tea for export had to undergo fine processing, coarsely processed tea was transported from Mucha to Ta Tao Cheng either by boat, on the Chingmei and Hsinhsiang Creeks, or by foot, for further processing. Close links were established between Mucha and Ta Tao Cheng.

The introduction of Tie Kuanyin tea during the Japanese occupation

After the Japanese took control of Taiwan, tea production, which had been controlled by Western companies, was now aided by Japanese company loans to the tea farmers, and Western capital was driven out. The Japanese then began to search for new varieties of tea, refined tea production techniques, and raised both quality and quantity of tea output.

In 1919, Mucha’s first tea company, the Mucha Tea Company, was set up. Seven years later came the even larger Wenshan Tea Co., Ltd. This was the beginning of superior tea production in Mucha itself. At this time, with the encouragement of the Japanese colonial government, tea production entered the machine age. 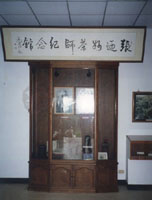 However, Mucha tie kuanyin (literally, “iron goddess of mercy”) tea is seen as the quintessential Mucha tea. Tie kuanyin tea was introduced during the Japanese era by two Mucha locals, Chang Nai-miao and Chang Nai-chien, who brought it from their ancestral home in Anxi, Fujian. After drinking this tea, they discovered that the leaves could be brewed four or five times and still keep their mellow and refreshing flavor. They then asked for 12 tea bushes to take back to Mucha. At that period, the Japanese colonial government held tea competitions to encourage superior tea. The tie kuanyin tea grown by Chang Nai-miao was entered in one of these competitions, and won first prize. This medal is on display today at the Chang Nai-miao Memorial Hall that was set up by his descendants near to Maokung, to preserve his memory. After winning this prize for his tie kuanyin tea, Chang Nai-miao went back again to Anxi at the suggestion of local people, and brought back 100 tea plants, which he distributed to several Mucha tea farmers in batches of 10 or 20. The initial results weren’t good. It wasn’t until 1926, when the Wenshan Tea Co., Ltd. was established and began cultivation now on the hills behind the site of today’s Mucha Elementary School that results slowly began to improve. Because of his rich experience, Chang Nai-miao was employed by the government as a tea production advisor and expert, and devoted himself to the improvement of tea quality. When you go to drink tea at Maokung, Mucha, don’t forget to stop by the Chang Nai-miao Memorial Hall, and brush up on this important page in the development of Mucha tea.

The rise of the sightseeing tea park

During the later period of Japanese occupation, the Second World War had a deep impact on tea production in Mucha, and after the war ended, the industry’s depressed fortunes fared no better. Fast forward to Lee Teng-hui’s office as Taipei City Mayor, when, because laws prohibited farmers from making repairs to or rebuilding their farmhouses, he gave permission for them to make extensive renovations, even rebuild, and advised the tea farmers on how to improve their living environment. In February 1980, he established the tea park. To begin with, 53 farms participated, and Mucha’s tea culture was given a new lease of life. In order to promote the tea in the sightseeing park, competitions were held each spring, autumn and winter for the best tie kuanyin tea. The criteria for grading are as follows: aroma and flavor count for 50%, appearance, 30%, leaf color, 20%. As city life becomes increasingly stressful, the Mucha sightseeing park brings together the tea produced and sold by the tea farmers themselves, and the leisure activity that is drinking tea, and it’s become a special part of the Taipei’s suburban eating and drinking culture. Understanding the history of the area will enhance your next cup of tea when you go to Maokung, and you can enjoy not just the rich, flavorful tea, but a little sense of history, too.