Humans lived on Green Island as early as 3000 years ago, at the end of the Neolithic Era. Prehistoric Green Island was a gangway for north-bound Austronesian migrants from the Philippines and elsewhere, and a springboard for the transmission of culture, but its isolation deriving from its offshore position also made it, at one time, a distant natural prison where serious offenders were detained. Consequently, the natural resources on the island and the islanders’ daily customs were resistant to change. In 1986, Green Island was designated a special scenic area; in 1988, it was further judged to be a national area of outstanding natural beauty, and tourism reinvigorated the island. This week’s Window on Taiwan is written by Chan Su-chuan, an assistant research fellow from the Preparatory Office of the Institute of Taiwan History at Academia Sinica. She has written about Green Island’s natural resources, its inhabitants, and the island’s past and present.

When most of us think of Green Island, it’s hard to separate the beauty and the ugliness that have been associated with it. The romantic melodies make Green Island seem like a little boat swaying beneath a silvery moon, conjures up palm trees and ocean tides as perfectly matched as a pair of young lovers… However, for a long time, Green Island was a prison for political prisoners and gangsters, and it also represents isolation from the world, and a prison in the sea. In contrast to the prosperous and bustling towns of Taiwan’s west coast, Green Island, in the ocean off Taiwan’s outer, eastern coast, is remote and faraway. A variety of reasons have led us to overlook the fact that Green Island has inhabitants whose histories on the island go back many generations, farming and fishing industries, religious beliefs. Green Island does have its own history.

Natural characteristics of the island

Green Island lies in the Pacific Ocean, 33 km to the southeast of the island of Taiwan, and this short distance allow the residents of Taitung to enjoy the pleasant sight of Green Island from their windows. Its crooked outline means that we can only describe its size very roughly: about 5 km long and 4 or 5 km wide, it has a shoreline of around 20 km, and an area of 15 square km. Although small, it’s Taiwan’s fourth largest offshore island after the main island of Penghu, Orchid Island and Penghu’s Fisherman’s Island.

The geology of this island is volcanic, the coast line which encircles it is a coral reef, and its topography is rugged. Huo Shao Hill at an elevation of 281 meters is its highest point. Its next highest, A Mei Hill, is at the center of the island, 275 meters above sea level, both are extinct craters. There are no major rivers or streams on the island, just a short mountain brook which flows from the hilly middle of the island out into the sea. The coastal plains where cultivation or construction is possible, and the laterite marine terraces take up around one third of the island; most of the flat land is distributed to the northwest of the island, where the major settlements of Kungkuan, Chungliao, Nanliao and Chaikou are to be found.

Warm, humid and windy, Green Island is characterized by its marine climate. Because rainwater runs off very easily, there are some signs of drought during winter and spring. During the winter, a strong northeasterly monsoon causes the waves to blow up around the coast, creating what is known as the “salty rain” which is damaging to crops and trees, and makes life tough during Green Island’s winters.

When the Kuroshio comes flowing northwards from the Philippines, and passes by the ocean ridge of the volcanic seabeds of Green Island and Orchid Island, it causes the formation of whirlpools, food organisms multiply in great numbers, creating good fishing grounds where fish are held up and migratory fish are found. Consequently, the fishing industry has been an economic lifeline to the people of Green Island since the time of the Japanese occupation.

The naming of Green Island

In Aboriginal myth, Green Island has the name of Sanasai, and the Ami, Kavalan and Ketagalan tribes say that it was a stepping-stone, a half-way point, in the process of migration. Through Sanasai, Taiwan’s east coast was linked to the island arcs of Southeast Asia, and allowed the ancestors of certain tribes to expand their space in southeast Asian maritime space, and provided limitless possibilities for the explanation of tribal history.

Green Island residents lived self-sufficiently in the 1950s, cut off from the world.

As for Han Chinese documentation, during the Qing dynasty, Green Island was known as Shang Tsai Island, Chicken Heart Island, Nan Mi Tung Island, and, most commonly, Huo Shao [literally: baked wheaten cake] Island. Fifty years later, during the Japanese occupation, it was universally known as “Huo Shao Island.” The name of “Green Island” comes from the Taiwan Provincial Government’s plans to plant the bare, treeless island with forest covering, and the name was changed officially in 1949.

Today Green Island is an off-shore township under the jurisdiction of Taitung County, divided into the three villages of Chungliao, Nanliao and Kungkuan; each village has a different number of settlements. Chungliao, for example, has only Chungliao. Nanliao includes Nanliao and Yukang. Kungkuan has the five settlements of Kungkuan, Chaikou, Liumakou, Tahu and Youping. The former settlements of Youtzu Hu, Nantzu Hu, Haitsanping and Tapaisha have been abandoned and the houses there lie empty. There are around 612 households on the island, and 2,513 inhabitants (according to the Taitung County Statistical Outline for 1996).

Archaeologists have discovered 12 sites on Green Island, and unearthed relics of a rich material culture. They have also been able to infer that there were people already living on Green Island about 3000 years ago. The most recent cultural signs of life are from an estimated 1000 years ago. Whether or not the end of this period can be linked with the history of the Aboriginals of eastern Taiwan awaits further investigation, but the Green Island of the Sanasai period was a stepping stone for Austronesian peoples during a busy period of migration, and successions of them passed through here to reach the east coast of Taiwan itself. Some of the Tao people of Orchid Island emigrated to Green Island at one point, and lived there until Han Chinese moved there at the beginning of the nineteenth century, when the island become a Han Chinese society.

Around the turn of the nineteenth century, Han Chinese fishermen from Hsiao Liuchiu Island off Pingtung County moved to Green Island with their families; because the plains were narrow and cramped, and arable land was limited, and by the mid-nineteenth century, population of the island was at saturation point. From here on, limited by transportation difficulties and the lack of a good natural harbor, the island’s residents were cut off from the world, and made a subsistence living from farming, supplemented by fishing. 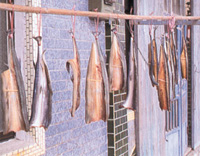 Fishing is the principle occupation of the people of Green Island.

During the period of Japanese occupation, the Japanese set up a processing plant for smoked fish, creating a change in the industry of the island. Fishermen from Okinawa moved to Green Island, and passed on their bonito-fishing skills, improving the simple traditional fishing methods of the local fishermen. The good fishing grounds surrounding the island were finally being used to the full, and soon became Green Island’s main source of livelihood, as farming receded to a supplementary role. However, although the industrial structure of the island had improved, the inhabitants’ traditional way of life remained as isolated as ever; with no new blood from outside to increase the population. The structure of human exchange and relationships, such as marriage, child-rearing, division of family property, etc., did not move beyond the spatial scope of the island’s settlements.

In the 1960s, transport and communications with the outside world gradually began to improve, providing basic terms for population mobility. At the same time, Taiwan’s economic structure was undergoing a great metamorphosis, as traditional industries struggled to continue, and Green Island too faced a similar predicament. Taitung City across the water, and the Hsinkang fishing harbor at Chengkung Township, started to attract migrants from Green Island, and with no senior high school for the teenagers of Green Island to attend, many of them were lost to the mainland. In this way, some of traditional settlements ended up abandoned.

In the 1980s, no one could have imagined the turning point which was to bring new life to Green Island. With its isolated outlook and coastal resources, it was designated as a special scenic area in 1986. In 1988, it was further judged to be a national area of outstanding natural beauty, and put under the management of the East Coast Scenic Area Administration, and in 1991, an administration office was formally established. With a tourism industry being heavily promoted, Green Island once again began to show signs of life. Large numbers of tourists meant that outside investment increased rapidly: hotels, restaurants, diving, scooter hire and gift shops began to spring up everywhere. Tourism became Green Island’s main industry.

Green Island used to be out of bounds for human rights, a symbol of the “white terror” period, and a sad place where many tears were shed. Now Green Island can shine once again. Aside from the new life brought by the tourism industry, important changes in Taiwan society have erased the cruel, dark nights of the past.