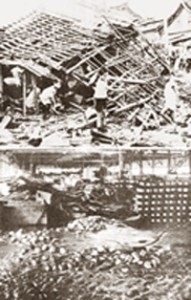 From a historical context, Taiwan is more of a “Natural Disaster Island” than an “Ilha Formosa.” There have been many disasters over the years resulting from its geographical location. Taiwan has a very special geographical position, and is often threatened by both man-made and natural disasters, thanks to its location at the hub of major trade, strategy and communications in the western Pacific, which makes it an attractive target for the world’s great powers. For these reasons, the rulers of Taiwan been frequently replaced in history; at the same time, its location on the circum-Pacific seismic belt, frequently visited by typhoons, means that Taiwan is often treated mercilessly by the forces of nature. The 9-21 earthquake of 1999, still fresh in people’s minds, inflicted serious casualties; and over the years, floods created by typhoons have destroyed homes and natural vegetation, and taken human life. This week’s Window on Taiwan is written by Professor Tai Pao-Tsun of Central University’s Graduate School of History. He writes of floods which occurred over 40 years ago, and recounts how the people and government of Taiwan worked to safeguard their homes in the face of this natural disaster.

Second only to the 9-21 disaster in post-war Taiwan

The most serious floods to hit Taiwan in modern times occurred on August 7, 1959. Typhoon Ellen formed in the seas south of Japan, and brought a tropical depression from around the Pratas Islands to Taiwan, causing torrential rains in south and central Taiwan which then created flooding. Experts concluded that the factors that created such a massive disaster were on the one hand intimately connected with the continuous torrential downpours, and Taiwan’s unfortunate natural landforms and geology, and on the other, with the insufficient communications networks and channels of the time, and the paucity of environmental protection and disaster prevention concepts. As a result, the aftermath of the disaster was particularly grisly. The flood area of the August 7 floods was fairly extensive, covering 13 Taiwanese counties and cities, and the six counties of Miaoli, Taichung, Nantou, Changhua, Yunlin and Chiayi, and Taichung City in particular were severely affected. Back then, this area contained 38% of the entire population, and was Taiwan’s major agricultural region. Rainstorms raged for three days, from August 7 to August 9, covering almost the entire western region, with the heaviest rainfall coming on the 7th. Scholars show that there were 15 places where the rainfall on that day exceeded 500 millimeters, and the storms were centered in Miaoli, Fengyuan, Fenyuan, the upper reaches of the Wu River, Touliu and Alishan. 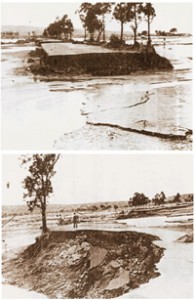 This sudden, unexpected disaster claimed 667 lives. Another 408 people went missing, 942 people were injured, and there was widespread suffering and unhappiness. All in all, over 300,000 disaster victims were given temporary accommodation by the government. The disaster was second in severity only to the 9-21 earthquake in Taiwan’s post-war period. The eventual figure for homes destroyed by the disaster was 27,466, and another 18,303 homes were partially destroyed. Farming, forestry and fishing all suffered heavy setbacks, and a total of 136,542 hectares of farmland alone were destroyed. Railways and roads were severely paralyzed. The railways were struck in 297 different places, and roads in 476. One can well imagine the power cuts and communications breakdowns that disrupted telecommunications and electricity. Public facilities such as schools, public sanitation facilities and hospitals were all disrupted. According to official statistics, over NT$3.5 billion of losses were incurred, 11% of the national income at the time, which was a grave blow to Taiwan.

Taiwan’s collective memory of the disaster Open a newspaper of the time, and you can feel the mood of the disaster victims even more clearly. The most common sight is homes flooded by the storms, descriptions of the pain of seeing relatives and friends drowned, “People standing on the rooftops of their submerged houses can only look on helplessly as the waters rise,” “Of the six houses and 11 people here, only I was rescued from the waters, so I’m writing this, and it sorrows me deeply.” The dead were to be pitied, but the relations that survived were even more helpless, and in order to reach their family in the disaster areas, even though all the roads were impassable, they tried their utmost to find a way to get to them, and see with their own eyes that there were only “a handful of households to be comforted, a few households to worry about.” It’s the recollection of the disaster by people from all over Taiwan. 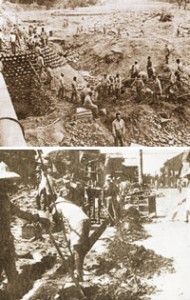 Due to the continuous violent flow of rain, transport

and communications were disrupted, making disaster relief work extremely difficult to carry out. Nevertheless the government immediately set to work arranging relief for disaster victims, and sanitation repairs and rebuilding work. So apart from mobilizing large numbers of troops to participate in the disaster relief work, the government also added over a million volunteers from the general public in accordance with the National Voluntary Labor Law to help with disaster relief and reconstruction work. At the same time, temporary shelters were set up, which offered not only accommodations but also schools on higher, non-flooded land. Even places such as the Taichung Tobacco Factory were used as temporary accommodation for the disaster victims.

On the other hand, the provincial government used the Taiwan Province Measures to Aid Families who have Suffered Deaths and Loss of their Homes as a Result of the Disaster to allot relief funds to the disaster victims. NT$1000 was given for a death, NT$700 for a missing person, NT$500 for injury, NT$400 to each household where the dwelling had been completely destroyed, NT$200 for a half-destroyed dwelling. The U.S., at that time still a diplomatic ally, provided nearly NT$10 million in aid, and apart from NT$2 million which was used for medical treatment and sanitation works in the disaster areas, the rest of the money was turned over to the disaster victims. The provincial government handed over half of the money, and also provided wheat flour relief goods. The rules were that each disaster victim over the age of 10 years could have 2 sacks of flour, while those under 10 years got one sack (each sack weighed 22 kilos). Although this gift of flour was kind and thoughtful, back in those days, people Taiwan weren’t used to cooking with wheat flour, and as the government feared that people would just re-sell these relief goods, half of the flour was replaced with rice. People all over Taiwan, as well as many Taiwanese living overseas, donated goods for the disaster-stricken, and these poured into the disaster areas, as people expressed their wishes to help the disaster victims rebuild. It was more than just human compassion for the dead, the fact that the country had gone through this experience together further strengthened and resolved the fight for the country. 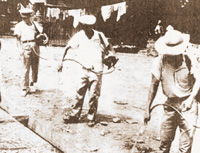 Because of the severity of this disaster, and the wide area it covered, the government used the Temporary Provisions Effective During the Period of Communist Rebellion to promulgate the President’s Emergency Disciplinary Action Order. In accordance with this law, tasks such as increasing or decreasing the budget, limiting national expenditure, levying taxes and selling savings bonds, etc., and also arrangements to do with post-disaster reconstruction, could be handled inexpensively. Where levying taxes was concerned, a “flood reconstruction tax donation” of 15% was added onto business tax, 30% was added to general income tax, 30% was added to animal slaughtering tax, and entertainment tax in the five cities of Taipei, Taichung, Tainan, Keelung, and Kaohsiung was limited to cinema tickets, where each ticket price was increased from NT$1 to NT$2. Restaurant tax was increased by 30%, land value tax and agricultural land tax were both increased by 40%, property, securities and commodities tax were all increased by 30%, and both public and private buses, electricity rates, telephone rates and railway tickets had a “flood reconstruction tax donation” added. The Bank of Taiwan put on sale “August 7 Disaster Area Reconstruction Prize Draw Savings Bonds” for a period of 12 weeks following the disaster. The bonds were sold in denominations of NT$10, and each week there was a prize draw, with a top prize of NT$400,000, and in this way funds were raised.

Over 40 years have passed, and Taiwan seems to have come out of the shadow of the August 7 floods. But in these forty-odd years, Taiwan has continually found itself amid new natural disasters, and related relief efforts and reconstruction. Vast legions of volunteers have been mobilized for relief efforts, and resources have been marshaled for reconstruction work, but human lives, once lost, cannot be brought back. Recovery following disasters is nothing like as good as prevention carried out before disaster strikes. We in Taiwan have suffered so many disasters, and we’ve gone through too much bitter suffering. We need to learn from past experience, and while we cannot close the stable door after the horse has bolted, if we cannot learn to head off disasters, then all these memories of past disasters are of no help at all. From these disasters come mutual support and feelings of identification. Let us realize that we are all in the same boat, and let’s take care of our country together.