尋求李萬居思想的重新定位：紀念李萬居先生一百週年冥誕
Seeking to reevaluate the thought of Lee Wan-chu:
The hundredth anniversary birth

2001 happens to be the one hundredth anniversary of the birth of Lee Wan-chu, an early proponent of democracy. This bookish politician, born into a poor family, moved with great ease in political circles, but research into his ideas and life since his death has been fairly meager. “A reckless man of letters”, “the half-mainlander heretic” were the labels used to describe him, but this is not enough to fully describe a busy life in an interesting era: he “refused the official position offered him by the KMT, and chose to pursue politics from the outside”; “he suffered the insults of the 228 ‘cleanup committee’ members under Chen Yi, hoping only to be able win some negotiating space for the ordinary people.” Lee Wan-chu ran a newspaper, organized a new political party, threw himself into local politics, and had a lifelong belief in and pursuit of free and democratic thought. Although he ended up penniless, he left his descendents a rich legacy of democracy. This week’s Window on Taiwan is written by Chen Yi-Shen associate research fellow at Academia Sinica’s Institute of Modern History, and he talks about the life and ideas of this early proponent of democracy in Taiwan.

Lee Wan-chu (1901-1966) was born in Yunlin, Taiwan. He grew up during the era of Japanese occupation, in a poor, rural family. He received his higher education in Shanghai and Paris, and then, for twenty years after the Second World War, he was all-powerful in Taiwanese politics. In the 35 years since Lee Wan-chu’s death, little research has been done or written about his lifelong thought, and he has been labeled a “reckless man of letters” and “a half-mainlander heretic,” yet I think that these cannot fully represent the important characteristics of his lifelong thinking.

The “reckless man of words” was not reckless:
a politician who socialized with the KMT regime for many years

”The Reckless Man of Words” was the title of an essay published in installments over almost a year in 1979 in “Chung Wai Magazine” by Chung Yang Jui-hsien, wife of Lee’s wife’s younger brother, Chung Kuo-yuan. Ms Chung Yang’s interpretation was: when Lee Wan-chu was serving as a member of the Taiwan Provincial Assembly, he still possessed the temperament of an intellectual, he expressed himself boldly, was rather reckless, and regardless of all consequences, so “the newspaper gentlemen of the time” gave him this nickname. In the final analysis, however, Lee Wan-chu was a political figure one hundred percent, starting in 1946 when he was voted member of the Taiwan Provincial Assembly, through his positions as a National Assembly Representative involved in writing the Constitution, Provisional Provincial Assembly Member, and his three terms as a member of the Provincial Assembly, right up until his death. During this time, he also ran the Kung Lun Pau, a newspaper which criticized political affairs, he took part in the movement to form a new party, and in a very difficult environment, he socialized with the KMT regime over a long period of time, all of which are not things that a man of letters or a reckless person could have achieved.

The “half-mainlander” who insisted on freedom and democracy

Next, the “half-mainlander heretic” was the distinguishing feature emphasized by writers such as Pu You-fu and Yang Chin-lin. The so-called “half-mainlander” label comes from the fact that during the period of Japanese rule, some Taiwanese people took up residence in China, and held positions in the Nationalist government. After the war, they followed the KMT regime to Taiwan, and became a politically-influential “special ethnic group,” including people such as You Mi-chian, Liu Chi-kuang, Huan Chao-chin, Lee Wan-chu, Wang Min-ning, Lien Chen-tung [father of Lien Chan] and Chiu Nien-tai. After the 228 Incident, the ethnic split between mainlanders and native Taiwanese become deepened, and for many native Taiwanese, so the name “half-mainlander” was pretty pejorative; half-mainlander political figures were not all KMT men, and even though Lee Wan-chu had a party background in his youth, he wasn’t really trusted by the KMT authorities, and on top of this, his personality was one which unequivocally supported freedom and democracy, and as a matter of course chose to go against the tide, and so to call him a “half-mainlander heretic” was quite appropriate. However, not all “half-mainlanders” were bad, for example, nearly all of the “half-mainlanders” who participated in the 228 “cleanup committee” took the side of the oppressed native Taiwanese, and so the label of “half-mainlander heretic” doesn’t completely describe the distinguishing characteristics of Lee Wan-chu’s thought.

Acting as a bridge between government and people:
throwing himself into local politics and running a newspaper

In Taiwan during the twenty years that followed the war, Lee Wan-chu was a figure for the political opposition movement, and he held up a shining light for the “tang-wai” political figures under the KMT-state system. He was able to get 40,000 or 50,000 votes each time he was re-elected as a member of the Taiwan Provincial Assembly, and apart from having to travel all over the towns and villages of Yunlin to build embankments and irrigation schemes for his fellow countrymen, his sustained speeches in the Provincial Assembly touching on every level, including freedom and human rights, the re-election of central government-level people’s representatives, party politics and even the possibility of launching a counterattack on mainland China, had the solemn air of a parliamentarian. Of course, at the same time as he was member of the Provincial Assembly, he was also the president of the Kung Lun Pao, and through this newspaper he was able to release and develop his “ideals and interests,” and setting a model for a non-government-run paper that did not submit to authoritarian might, and was not run for profit or gain. Although there were those who criticized him for not knowing anything about running a business, the Kung Lun Pao’s historical position is determined by its style of political expression, and not by the number of copies, to say nothing of the ban by the authorities on the paper carrying advertising, and the use of kidnap and arrest of workers at the paper to put pressure on the Kung Lun Pao. In conclusion, the Kung Lun Pao became a part of Lee Wan-chu’s political life, and the authorities increasingly came to realize this. Therefore, before 1960, when Lee Wan-chu was engaged in leading activities for a new party, the authorities bought the stock rights and used various judicial measures to force him to hand over the running of the paper to them. Lee’s eldest son, Lee Nan-hui, remembering this course of events, said that the KMT planned to buy the Kung Lun Pao with US$500,000, and were even willing to give Lee Wan-chu the title of “chairman of the board.” The colleagues at the newspaper felt that the game was as good as lost, and encouraged Lee Nan-hui to persuade his father to accept it. Lee Nan-hui was “told off by [his] father, and [his] father said that he had come back to Taiwan with a dream, he hoped to act as a bridge between the government and the people, to speak for the ordinary people, and for this ideal he would rather close the paper down than accept someone else’s money.” 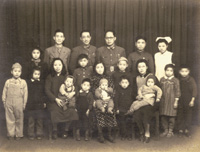 Lee Wan-chu with his family

Lee Wan-chu put his free and democratic methods into practice, he ran a newspaper, engaged in politics, formed a party, and in all of this, his most powerful backing was his long-term support from his fellow countrymen in Yunlin, who repeatedly elected him to office as a member of the Provincial Assembly (at the time, the highest level of elected people’s representative). In 1960, in order to hold in check the activities of new parties reacting to the Lei Chen insurrection case, the authorities did not dare directly arrest Lee Wan-chu, very probably fearing the foundation of popular support which he had.

Analyzing the nationalist position of a democratic hero

As a pioneer of the democratic movement, and even a “democratic hero,” Lee Wan-chu fully deserves this title. There is an urgent need to clear up the question of his national identity, and ideas and position on nationalism. As a young man, Lee Wan-chu was dissatisfied with Japanese rule, and after studying in France, he took up a job in Nanjing, and worked at the “China Institute of International Studies” throughout the Sino-Japanese war, gathering intelligence information on Japan for the Nationalist government. After the war he became one of the staff members sent to Taiwan to take up office, and during this period, it is easy to get a feeling of his sentiments for his home and country from his poetry and writings, and it’s almost impossible to doubt his identification with the Chinese people. But when the 228 Incident occurred, he himself narrowly escaped arrest, and a great many of his friends were shot, so how could he avoid being shaken to his very core? So, in October 1947, the Kung Lun Pao began publication, a date which is not coincidental. After this came a long period of resistance to the KMT, and apart from the basis in his values of democratic freedom, he could hardly help having an alternative “racial feeling.”

Among the resources on Lee Wan-chu’s thought, there is plenty of material on China, but as his second son, Lee Nan-hsiung (who holds a Ph.D. in political science from the University of Chicago), says, this is on the level of “cultural China,” and he is fairly certain that this is his father’s vision of China rather than his sentimental feelings for it. If we want to put Lee Wan-chu’s belief values in order, there is no doubt that freedom, democracy and human rights come before nationalism, and this can be seen in his opinions in the “Taiwan Min Sheng Pao” from his period in Chungking. During the twenty years after the war, both Communist China and “KMT China” (on Taiwan) were autocratic dictatorial systems, and it is quite clear that Lee Wan-chu identified with neither of them.

Although both biographies of Lee Wan-chu, the “Deep Blue Sea” by Chung Yang Jui-hsien, and the “Critical Biography of Lee Wan-chu” by Professor Yang Chin-lin of Xiamen University, have their merits, the sections on Lee’s thoughts on ethnicity overstate his feelings for and identification with China, and neglect the different periods he went through in his life, and the issues of different levels of culture and politics, even to the extent of conflicting with the facts of his so-called “five-point will” (Chung Yang Jui-hsien’s version of the five points reads: “I have not lived to see the restoration of the mainland, which I will regret all my life.”). In an oral interview which I recorded with Mr. Lee Nan-hsiung this year, he corrected this. On this centenary of Lee Wan-chu’s birth, we should reevaluate the timeliness of his political thought.