“Manka” is a word meaning “canoe” in one of the Pingpu languages.
This picture shows a covered arcade in a street in Manka in the 1931.

Taipei is Taiwan’s largest city, and an internationally famous one. Its rapid transformation into a metropolis changed the old face of Taipei, but inspection of some of its place names can show us the developing trajectory of Taipei’s history. It’s really true that for each step we take, we uncover a piece of history.

Explanatory notes on the Pingpu tribes and Spanish and Dutch colonists

The Taipei basin was once generally known as the home of the Ketagalan people, one of the Pingpu tribes. After a long period of contact between the Pingpu and Han peoples, the Pingpu people lost external signs of their ethnicity and culture, but they did retain some commonly-seen place names, such as “Tatun Mountain,” a name which derives from a Pingpu placename, and which was written as “Touckenan” in the Dutch era. “Peitou” was originally spelt “Kipatauw,” meaning “witch,” and the old name for the Shihlin district was “Pattsiran,” which meant “hot springs.” The old name for Sungshan was “Tsigauantsigau.” The Neihu district was known as “Tayou,” or, as the Dutch wrote it, “Cattajo,” indicatinga woman’s head ornament. Talungtong was originally called “Pourompon” and “Sirongh,” both of which are names of Pingpusocieties. “Manka” means “canoe” , “Shetzu” was the Han people’s name for a place where the Pingpu peoples lived.

In 1571, The Spanish came east and took the Philippines as a colony. In 1626, they captured Taiwan, and it is said that San Tiao Chiao, the name of the northeast tip of Taiwan, comes from the name the Spanish gave this place, San Diago. In 1628, the Spanish built the fort of San Domingo in the hills at the mouth of the Tamshui River, and Kuandu, called “Gamdau” (lit. “sweet bean”) in Taiwanese, is, according to one version, taken from the Spanish “casidor” (meaning “cape”). There is a station on the Tamshui MRT line called “Chili An”, a place name which was spelt “Kirananna” by the Dutch. Thename’s origins derive from a bay in the Philippines which the Spanish called “Bahia-Irigan.”

Footprints left by pioneers from the Qing Dynasty

In 1683, after the Qing empire took Taiwan, Han people from Fujian and Guangdong began to cross the sea to Taiwan in large numbers. In 1709, the Chen Lai-chang Development Company opened up and developed the Taipei Basin, and villages grew up one after another, so we have the names “Hsin Chuang” (“new village”) and “Chiu Chuang” (“old village,” this is a place name in Nankang) as names of settlements. If these places were communities where inhabitants shared a common family name, then we have the place name “Chu Tsuo Lun” (near to Chang An East Road). Around the Taipei Basin are hills and mountains with topographical characteristics such as “Yuanshan” (“round mountain”), “Chanchu Shan” (“toad mountain”), “Kuanyin Shan” (“Goddess of Mercy mountain”), “Wuchih Shan” (“five fingers mountain”) and “Chi Hsing Shan” (“seven stars mountain”). In areas where the topography is flatter, we see “pu” (“plain”) appearing in place names, such as “Neipu” (“inner plain”) and “Wufenpu.” Where the land rises up, we have “Chung Lun” (“center mountain”). Where streams and rivers flow, we have “Shuanghsi” (“twin streams”), “Huanghsi” (“sulphur stream”), “Hsintienhsi” (“Hsintien stream”), etc. Names which show the position of settlements include “Nankang” (“south harbor”), “Neihu” (“inner lake”), “Linkou” (“entrance to the woods”) and “Pingting” (“top of the level ground”). Back when land development was beginning, certain animals and plants were also used in place names, such as “Shanchu Ku” (“mountain boar’s den”) and “Lu Ku” (“deer’s den”). These names indicate low-lying lakes haunted by mountain boar and deer. In the past, Taiwan had many camphor trees, and in there is a place near to Nankang called “Changshu Wan” (“camphor tree bay”).

Han people have left behind them many place names connected with agriculture from the days when they were developing Taipei. For instance, a number of people cooperated to develop the land, and left the names “Wuku” (“five shares”) and “Shipafen” (“eighteen portions,” a place in Peitou). Paddy fields necessitated the construction of irrigation systems, and so we have the names “Liukungchun” (“Liu public irrigation ditch), “Yungchunpei” (“eternal spring irrigation ditch”) and “TaAnPei” (“great peace irrigation ditch”). After the land was developed, people had to calculate the area of the land, and they continued to use the “jia” (roughly, acre) from the Dutch era as a unit of measurement. In the past, the area of land an ox could plow was around five jia, and so we have the place names “Sanchang Li” (“three areas to plow”), “Liuchang Li” (“six areas to plow”), “Chichang Li” (“seven areas to plow”) and “Shiherhchang Li” (“twelve areas to plow”). The place where harvested rice was put out to dry was called “Tataocheng” (“big plaza for rice”), and the place designed for shops and firms to run their businesses was called “Hsintien” (“new shop”). The place where landlords collected rent and had their offices was called “Kungkuan” (“villas” owned by these rich landlords, where they would collect the rent).

In the process of developing and exploiting the land, clashes occurred between Han people and Aboriginal people, and so bamboo hedges were planted as defense measures to keep those inside safe and prevent outsiders from invading. One such place was called “Chuwei” (“bamboo surroundings”). If wood was used to build fencing, then it was called “Mucha” (“wooden fence”), if earthen ramparts served the same purpose they were called “Tucheng” (“earthen city wall”). In the Hsintien Creek basin, there still exist place names that show the order of these fortifications: “Tingcheng” (“top city wall”) and “Erhcheng” (“second city wall”). In view of the frequent clashes between Han and Aboriginal peoples, the Qing government installed stone markers on the boundaries, restraining the Han people from developing any land beyond the boundaries, which might jeopardize the Pingpu people’s livelihoods. The original “Shihpai” (“stone marker”) still exists, and has been put on display at Shihpai MRT station, where it stands as a witness to history. 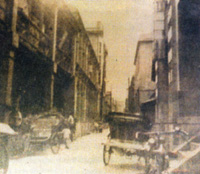 Taipei’s development as a metropolis started in the three city areas of Manka,
Tataocheng and Chengnei, and gradually extended eastwards to make up the city we see today.
This picture shows Tataocheng’s Chienchiu Street in 1958 (today South Kueiteh Street).

The city of Taipei was established between 1882 to 1884, and the area bordered by today’s Chunghsiao West Road, Chunghua Road, Aikuo West Road, Chungshan South road was what was known as the “Chengnei” (“inner city”). The land outside the Cheng’en Gate is the “Peimenkou” (“north entrance”). Taipei’s development as a big city started from the three city areas of Manka, Tataocheng and Chengnei, and gradually extended eastwards to make up the city we see today.

Many modern, public buildings were constructed during the Japanese colonial period,
establishing the foundations of Taipei as a modern city.Union Hall (today’s Chungshan Hall)

Vestiges of the Japanese colonial era

After Japan took possession of Taiwan in 1895, Taipei continued to be the provincial capital it had been under the Qing, and became the administrative center of colonial rule. The Japanese tore down the city walls, and build a great many contemporary public buildings, such as the Governor’s Office (Japanese:Sotofuku), law courts, the official residence of the Taiwan Governor, the Monopoly Bureau, Union Hall (today’s Chungshan Hall), banks, railway stations, new parks, museums, hospitals, schools and more, establishing the foundations for Taipei as a modern city. In the 1920s, the Japanese changed many of Taiwan’s place names. Places in the Taipei region such as Shuifanjiao, which became “Shiosi,” the Japanese pronunciation of today’s Hsichih. Hsikou became “Matsuyama” (Mandarin pronunciation:Sungshan), Manka became “Banka” (Mandarin pronunciation:Wanhua), etc. Urban street blocks were also named in the Japanese style, giving us “Kabayama Machi” (“Huashanting”, commemorating the first Japanese governor of Taiwan, Motonori Kabayama), “Umaba Machi” (“Machangting”), “Nishin Machi” (“Jihshinting”), and one which we still have today, “Seimon Machi” (Hsimenting).

We can look to historical remains, footprints, buildings, maps, written records, orally transmitted stories and legends to understand a city’s history, and from the names of the places we go to meet, work, study and enjoy ourselves, we can also learn about local history. All places of action have a history, and an interest in and knowledge of history naturally build up a person’s humanity and tolerance.