Earthquakes symbolize a kind of dialogue between man and earth, and in Taiwan’s history there has been a continual contact sustained to different extents with the inhabitants of this land and their rulers. This week’s Window on Taiwan is written by Lee Tai-Han, graduate student in history at National Central University. Lee takes a look at the repeated earthquakes in Taiwan’s history.

It is not difficult to discern that, unlike typhoons, which until recently have often been given Western names, earthquakes are mostly named after the date of the occurrence, or the town or county nearest the epicenter. The 921 earthquake occurred two years ago, and two years on, people are gradually walking up from this nightmare. In the immediate wake of the earthquake, people were newly made aware of this land that we live on, and examined the importance of past accumulated wisdom and tradition regarding earthquakes. The quake occurred at 1:47 a.m. on September 21, 1999, and measured 7.3 on the Richter scale. It created major losses such as had rarely been seen since the war. In terms of human loss, 2412 people lost their lives, 11,305 were injured. 26,831 homes were completely destroyed, another 24,495 were partially destroyed. In addition to those who were immediately affected by the earthquake at the instant it occurred, many others were soon affected by the dangers and inconveniences that came when power and water supplies were cut off and roads were blocked or destroyed: these are all things that will surely stay in our collective memory.

If we look back in time to the Japanese occupation, the earthquake which caused the greatest loss of life occurred on April 21, 1935, on the fortieth anniversary of Japanese rule in Taiwan. At 6:02:16 a.m. a violent earthquake inflicted heavy losses on the two prefectures, as they then were, of Hsinchu and Taichung. It measured 7.1 on the Richter scale and killed 3,422 people. Another 11,833 were injured, and over 60,000 homes were destroyed. The reason why this earthquake inflicted so serious a loss of life was closely connected to the fact that many Taiwanese people built their homes out of adobe. The thick adobes softened and crumbled when soaked through with rain water, and not only could it not stand up to earthquakes, it actually intensified the effects of the disaster, which is why contemporary Japanese scholar Sano Liki called this earthquake “the adobe earthquake.”

Various interpretations and traditions regarding earthquakes

Going even further back in time, in Qing-governed Taiwan, the scientific causes of earthquakes were not yet understood, and so each time an earthquake occurred, people would try to give various interpretations, roughly speaking, we can split these interpretations of earthquakes into several different types. The first type of interpretation was that earthquakes were connected to government: people believed that the occurrence of earthquakes indicated whether or not the country was well ruled, or if Taiwan was being administrated inappropriately. The second type had to do with natural geography and astronomy: after a storm, the appearance of thunder and comets could bring on an earthquake, and people from the mainland of China viewed this lonely outpost, this land floating out at sea, and weren’t surprised that it was easy for earthquakes to happen in such a place. When plants showed strange signs such as “coral bean trees not coming into flower”, this too was an omen heralding an earthquake. The third kind was thought to be to do with cycles, such as certain years in the lunar 60-year cycle, and it was thought that earthquakes could easily occur at these times. The fourth kind was linked to legend: if a giant turtle flipped over, or there was a volcanic eruption, or something of this kind, then this would be a portent of an earthquake. Taiwan was at this time seen as “somewhere overseas”, and so it was often thought disasters were a commonplace even. The fifth kind was linked to historic military disasters: in Taiwan’s history, when, for example, the Dutch were defeated by Koxinga, when Cheng Ke-shuang surrendered to the Qing, when Chu Yit-gui’s popular uprising broke out, a major earthquake occurred on each occasion, so people drew the wrong conclusions. Earthquakes represented heaven’s rewards and punishments to mortals, rewards if an official died for the sake of honor, as a sign that heaven was visibly moved, and a punishment if some young scholar spent the night with a prostitute and was then crushed to death, all of these were factors behind earthquakes. The use of scientific machinery to investigate the cause of earthquakes did not begin until two years into the Japanese occupation of Taiwan (1897).

Major Earthquakes during the Qing dynasty

Our understanding of earthquakes during the Qing dynasty is mostly limited by written records and files that have been left behind. From these written accounts, we learn that the large earthquakes that occurred during the Qing dynasty were actually as big as the two big earthquakes that occurred in the Japanese and post-war eras. For example, in terms of buildings destroyed, a big earthquake at Chiayi during the Qing dynasty unexpectedly caused the collapse of 14,426 buildings throughout Chiayi County, and of another 9,723 in Changhua County. Hundreds or even thousands of lives were lost in earthquakes, such as the earthquake of 1848, which killed around 1,000 people in Chiayi and Changhua. The emotional damage inflicted by earthquakes is even harder to heal. When big earthquakes made their surprise attacks, people in times gone were not only directly up against the great pain of losing their loved ones, they also had no way of knowing exactly why the earthquake had occurred, and so gossip and rumor would often spread through the streets. Common rumors such as the whisper that food and drink had been poisoned, and that evil bandits from outside were going to take advantage of the chaos to threaten the townsfolk would reach people’s ears. Consequently, in the aftermath of an earthquake, local civil and military functionaries would be extremely cautious, and work hard to quash the rumors, and increase military presence in an effort to preserve local public order. But the appearance of such rumors would cause people to worry that another big shock was on the way, and the serious public hygiene problems that cropped up in the aftermath of an earthquake, leading to epidemic illnesses, were very closely connected. 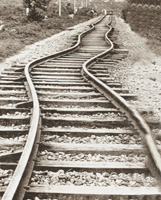 In 1935, the great Central Region earthquake ruptured north-south rail connections in Taiwan.
This picture shows how a section of track close to the southern mouth of Tunnel 8,
north of Houli train station, was twisted out of shape by the earthquake

Earthquakes’ power of destruction can reach everywhere, and historically, earthquakes have brought low formerly prosperous towns. The 1862 earthquake kicked off the gradual decline of Maokangwei. Originally, it was a prosperous as Yenshui Kang, and had close to a thousand inhabitants and streets packed with shops and stores. After the earthquake struck, the good times did not return. Tuntzuchiao in Taichung Prefecture was once the most bustling and prosperous town of Neipuchuang, but the earthquake of 1935 killed 4,000 people in the blink of an eye, and severely damaged the development of the entire town. The impact on the environment of this shocking level of destruction was even harder to overlook, mountains moved, rivers changed their course: the earthquake struck the whole of Taiwan.

During the Qing era, because the Qing empire’s domain in Taiwan did not yet cover the entire island, and communications and transport were not convenient, earthquakes were often seen as regional disasters. But under Japanese colonial rule, because the scope of government covered the whole island, news of earthquakes was transmitted through newspapers, broadcasting and transportation links, and Taiwan’s rulers powerful functioning, all the departments of the Governor’s Office, the prefectures and the cities were all involved in disaster relief and reconstruction work, and gradually an island-wide consensus was formed regarding aid and care in the wake of earthquakes. Only the Japanese rulers, in their attitude towards disaster relief, were very certainly reproachable. Disaster relief became a benevolent gift of the rulers, and when huge efforts were being made for reconstruction, they did not forget make up some instructive little anecdotes, and deliberately embellished a story about a student in Kungkuan Village in Miaoli, named Chan Teh-kun, who having been badly injured by the quake, sang the Japanese national anthem, “Kimigayo”, on his deathbed. The story was supposed to make Taiwanese people feel patriotic sentiments towards Japan.

After the great 921 earthquake, Taiwan’s attitudes in the face of earthquakes gradually became more mature and positive, and attitudes towards the damage brought by earthquakes shifted from the old concern only for people and things, bringing comfort and rebuilding, to the preservation of historical relics and the passing on of disaster memories. Looking back at Taiwan’s earthquakes, we can see that people have moved from what was originally muddleheaded conjecture to a deeper understanding, and government departments too have a more positive and powerful handing of earthquakes and disasters. With the development of science, we’ve gone from measuring earthquakes with our eyes to measuring them with equipment. Different kinds of earthquakes have happened in Taiwan at different times. But the only constant is the mutual support offered by the people living in this land, a oneness of heart during suffering, that is passed on from one generation to the next.