台灣歌謠與生活
Song and life in Taiwan 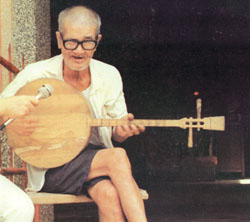 Although, from the standpoint of historical research, the poems and collected essays of a society’s intelligentsia and the recordings of its governmental figures are of course worth attention, the portraits of human life contained in its people’s songs possess a greater freshness and vivacity. Their subject matter includes everything from historical stories to personal anecdotes, not to mention romantic allurements, confessions and adulation. Their lyrics voice the morality and values of the common people; they speak of political transformations and of the people’s sufferings and frustrations; and they are moving expressions of all the little things that make up our lives. Thus, whether it be well-known, more traditional folk songs or the contemporary urban-flavored popular songs in the era of industrialization and commercialization of music / human activities, the songs people sing constitute records of the evolutionary changes and collective consciousness of a people during different eras. As such, they are invaluable historical source materials for understanding the lives of a people. This week’s Window on Taiwan has invited Associate Professor Yang Li-Chu of the National Taipei University of Technology, Center for General Education to lead us into the world of Taiwan song and, through an examination of songs’ contents and evolutionary courses of development, to get a feeling for another side of daily life in Taiwan through the ages.

Broadly speaking, we may distinguish “songs” as being either “natural” or consciously composed. The former class of songs, also known as “folk songs,” are characterized in that, for the most part, no one knows their original creators, and they are transmitted from person to person, the lyrics changing with the people who sing them and the times as they are passed on. For this reason, some people say that the creators of folk songs are the people as a whole, reflecting the sentiments particular to a people and constituting an expression of their group identity. The latter class of popular songs comprises those authored by individuals, whose creations may be motivated by commercial, artistic and/or eternal values. Pop songs and artistic songs are of this latter class.

Actually, this distinction is somewhat flawed inasmuch as an ancient folk song was originally a pop song of its time, composed by an individual, and it is only due to the endless modifications of it as it was transmitted and the changes it underwent through successive generations that its authorship has come to be uncertain. Moreover, it is not easy to draw a sharp distinction between an “artistic” and a “popular” song. Although both are the creations of individual composers, as long as they are beloved and identified with by the public, they will naturally be passed down, the people infusing them with their own meanings, enabling us thereby to see in them the lives and sentiments of an entire people. 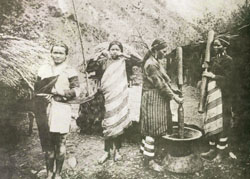 Prior to the large-scale influx of ethnic Han Chinese people into Taiwan, Taiwan was originally constituted of Aboriginal societies. In times past, whether it was the various Pingpu tribes in Western Taiwan, or other tribes in the central mountain regions or in eastern Taiwan, song and dance were inseparable parts of daily life. Singing and dancing were found in all aspects of life, from individual households to group rituals, and songs were vehicles not merely for entertainment or expression of individual emotion, but had religious and social functions. From the themes of their songs — such as farming songs, hunting songs, fishing songs, prayerful songs for a bountiful millet harvest, warring songs, songs for driving away evil spirits, etc. — we can get some insights into different aspects of Aborigine life, and in some Aborigine societies love songs played a role in courtship. Because Aborigine languages were only oral and not written, besides serving the aforementioned purposes, their songs functioned as tools for preserving historical memories, such songs including, for example, ancestor-spirit songs and legend songs.

With the coming of Han immigration into Taiwan, however, and with the “paddification” of western Taiwan [i.e. transformation of western regions into flooded rice paddies] and the gradual shrinkage of space left for the fishing, hunting and dry-land farming lifestyles of Aborigine tribespeople, the Pingpu came to be referred to as a “lost race,” and under the pressure of a dominant alien culture, Aborigine societies gradually changed in demeanor, their songs naturally undergoing a parallel metamorphosis. As the consequence of the coming of Christian missionaries in the 19th century, religious hymns have now become incorporated as a part of Aborigines’ music. A half century of Japanese colonial rule injected a strong dose of Japanese culture into Aborigine societies, having an undeniably deep influence upon them. These influences are evident in the Japanese- and Han-flavored melodies used, for example, in the folk songs of the Ahmei tribespeople.

In today’s world where Western pop music has become ubiquitous, Aboriginal singers who have emerged in the Taiwan pop music scene have given it a new voice, enabling quite a few traditional Aboriginal folk songs to enter into the music record market in repackaged form. For Aborigines, who have now come to accept music as a form of entertainment or leisure activity, and who, in the wake of urbanization have moved into the cities, song has become a medium for expressing the struggles and frustrations in their practical lives and a means for crystallizing the sentiment of a people separated from their homelands, as reflected, for example, in the popularity of such songs as “Wandering to Taipei” or “We are All One Family.”

Besides Taiwan’s Aboriginal peoples, the ethnic Han majority, who have immigrated to Taiwan in wave upon wave from the 17th century onward, have not only brought with them the lifestyles of their homelands but their song and dance traditions as well. Whether originating in Fukien Province or Kwuantung Province, after undergoing the baptismal process of Taiwan nativization, they too became folk songs reflecting local culture. The massive compendium of Fukienese and Cantonese folk songs not only served not only as the spiritual fount of the early Han immigrants to Taiwan but stands as testimony to Taiwan’s historical development.

Based upon lyrics, Han folk songs can be broadly classified as belonging to the following several types: (1) FAMILY VALUE SONGS – as for example, “sickness songs” [sung by expectant women to their unborn babies and to themselves in hopes that their own illnesses would not affect their babies] “Becoming a Daughter-in-Law” or “full-month songs” [celebratory songs sung at the time when a new-born baby reaches one month of age, in order to bring good fortune for the child’s future development]; (2) WORK SONGS – as for example, tea leaf-picking songs, water buffalo-plowing songs or food-begging songs; (3) RELIGIOUS SACRIFICIAL SONGS – as for example, spirit-guide songs [for guiding the spirits of newly deceased in their after-lives] or Taoist liturgical songs; (4) NARRATIVE SONGS – such as exhortatory songs, season-related songs or “Cheng Cheng-kung Opens Up Taiwan” [Cheng Chen-kung was a military-political figure who came to Taiwan from China in an effort to keep the Ming Dynasty alive in the early years of the Ch’ing Dynasty, established by the Manchu people of present-day northeastern China] ; (5) HUMOROUS SONGS – such as betrothal songs, drinking songs or hand-gesture game songs [songs sung in accompaniment to games involving rhythmically changing hand gestures (such as paper-stone-scissors), often sung in group drinking, the loser having to “bottoms-up”] ; (6) LOVE SONGS – an eternal theme in songs ancient and modern, constituting a large proportion of either Fukienese or Hakka ethnic folk songs — Hakka “mountain songs,” for example, including many with romantic lyrics; and (7) CHILDREN’S SONGS – sung by children in their daily lives and including many themes, which, in the days before modern-day universal education, served not only as a form of entertainment but a vehicle for inculcating early lessons in life. 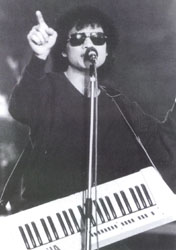 Modern singer Lo Ta-yiu, known for the social-protest flavor of his early songs.

Emergence of the pop music market

20th century [Japanese] colonialization and modernization occasioned an acceleration of social change in Taiwan, and, as the result of the rapid growth of urban populations stimulated by industrialization and economic development, there arose urban life-oriented tunes aimed at city-dwelling consumers. If folk songs can be characterized as ancient, broadly “native” music, then pop songs are the songs of modern-day urbanites. Just prior to, through and beyond the 1920s, record companies sprouted up in Taiwan, while in the 1930s “Taiwanese” (i.e. Hoklo, or southern Fukien dialect) pop songs came into vogue, with ko-tsai-hsi [Taiwanese-language “song plays” similar to Western musicals] becoming a major form of entertainment. These record company-commissioned songs in tune with the popular consciousness included not a few outstanding examples such as “Looking Forward to the Spring Wind,” “Rainy Night Flowers” or “Moon-lit Night Sadness,” which everyone even to this day loves to join in singing. The predominantly mournful pop songs of the period are a reflection of a cumulative popular malaise which grew over the decades. Despite the Japanese colonialists’ ballyhooing of the myth of “progress,” this could not diminish the feeling of hurt in the people’s hearts, popular music becoming the most obvious mirror of that ever-suffering spirit of a people under colonial rule.

Despite the return of Taiwan into the bosom of China after World War II, it was followed by successive economic depression, social unrest, the February 28 Incident and the White Terror; and due to tight political control during the years when Taiwan’s economy took flight, various prohibitions were unavoidable and sensitive lyrics had to be rewritten, as officialdom, driven by its ideological mindset [of reconquering China], made a concerted effort to promote “national language” (Mandarin) songs and patriotic songs while banning public performance of certain songs. Nevertheless, throughout various post-war periods, popular music remained the best vehicle for keeping the emotions in balance. Whether the language of song was Mandarin or Taiwanese, it conveyed personal feelings as well as thoughts on family and country; and although, to be sure, the lyrics of many a song projected mainland China as the dreamland of many, there were also not a few songs which retained a strong feeling of love for the native soil of Taiwan, and even more numerous were songs with lyrics which recorded the many sundry aspects of Taiwan society.

The 1970s saw the upsurge of modern-day folk songs, after which refreshingly new “campus songs” [composed by college students in government-sponsored competitions] came into the mainstream of popular music. Following upon political liberalization in the 1980s, the content of pop songs became more diversified and thus more able to reflect all manner of social phenomena. However, under the overwhelming influence of commercialization plus homogenization of the record industry, the music scene came to place increasing attention on molding singers’ public images. Singing idols became the models for youths’ imitation, and, in popular music, the person of the singer became more important that the song itself. The replacement of one singing star by another in the music market has proceeded in dizzying succession, and best-selling songs no sooner appear than fade away. The age of folk songs has now long passed and, as with the passing of traditional lifestyles, once gone will not return. Of course, nostalgia for earlier times can nevertheless still be transformed into commercial products, and in that role, whether they be folk songs with an ancient flavor or undying old favorites, they serve not only as consumer items but as witnesses to the changes of the times.