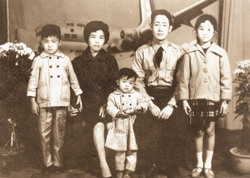 Taiwan is a multi-ethnic country. The ethnic groups are normally classified into the four main categories of aboriginal peoples, Fukienese, Hakka, and mainlanders. Multi-ethnicity has shaped Taiwan’s rich and varied culture and investigating and understanding the evolving history of relations between the ethnic groups and the Taiwanese identity that has developed out of an ethnic consciousness must be faced in order to establish sustained development of the Taiwanese nation. This week, Window on Taiwan has invited Professor Tai Pao-tsun, from the Central University’s Graduate School of History to write specially of the shared destiny of multi-culturalism, that constitutes the past and future of the nation of Taiwan, from the perspective of the ethnic groups who inhabit this land, redefined as the “original inhabitants”, “early inhabitants” and “new inhabitants”, in addition to speaking of the evolution and branches of each group’s culture and expounding on the relationships between the ethnic groups and the intermingling of their lives together.

The aboriginal peoples: The history of a marginalized people

Taiwan’s aboriginal people are comprised of ten ethnic groups, which are currently splitting into further ethnic divisions. The 390,000 strong aboriginal population accounts for only 1.7 percent of the total population and there are large differences in the size of the populations of each aboriginal group which are spread over a large area. It was only a century ago that the tribal societies were incorporated into the system of the modern nation. As a result of being subjected to long-term rule by the mechanisms of foreign regimes and the attacks of capitalist economics, in addition to cultural and educational transformations, the politics, economics, society, and all cultural aspects of the aboriginal peoples have continuously marginalized and in a state of decline.

It is only in recent years, following the aboriginal social movement and the trend towards democratic politics, that the plight of the aboriginal peoples has received more attention from public policy with the establishment of an aboriginal affairs department at each level of government that the educational and cultural aspects have gradually improved. Intermingling between the Pingpu (lowland) aboriginal tribe and the early Han immigrants has resulted in the loss of their distinct cultural characteristics. However, the folk saying “there are mainland grandfathers but no mainland grandmothers” and research, concerning the genes of the people of Taiwan by Dr. Chen Shun-sheng and Dr. Lin Ma-li provide the theories of the origins of the Taiwanese people with a foundation for identification.

The history, ceremonial rites, and music of the Pingpu culture is reemerging and bringing about a rediscovery of the self and the desire to “escape the Han and join the aboriginal people”, in some people. The Kavalan people who migrated to Hualien have demanded that they be recognized as the tenth aboriginal ethnic group. As the Sao tribe has been successful in getting its name officially recognized, it is likely that they will continue with their demands for recognition as the 11th aboriginal tribe. There is the phenomenon of a further division among the ten aboriginal tribes as seen in the long-term aspirations of the Truku tribe in Hualien to separate from the Atayal tribe. In addition, as part of the aboriginal peoples struggle to further the rights and interests of their ethnic group, a self-government movement is brewing among the people of the Tsou and Tao tribes. The Han people seek identification with their roots through a relationship with the original Han people, while the ethnic movement of the aboriginal peoples is a pursuit of equality rights as they establish an ethnic identity.

The origins of the Han language family immigrants are traced to Fukien and Canton provinces in China accounting for the distinct Fukienese (Holo) and Hakka groups. The Fukienese make up approximately 70 percent of the population with the Hakka accounting for approximately 15 percent and in relation to the aboriginal peoples can together be referred to as the “early inhabitants”. The early inhabitants were compelled to risk crossing the Taiwan Strait as a result of economic factors arising from the pressures of over-population. This can be seen in the folk heartsick sayings, “crossing from the mainland to Taiwan will tie your heart in knots” and “(in crossing) six will die, three will remain and one will turn back”.

The early immigrants intent on “eking out an existence” worked tirelessly to carve out an existence. Confronted with the poor government and corrupt officials of the imperial Ching Dynasty they often resisted the officials in defense of the people. However, their resistance was never successful. The opposition to the Ching Dynasty by Lin Shuang-wen’s troops from 1786 to 1788, controlled, for a time, nearly half of the island of Taiwan and was the largest popular uprising during the Ching Dynasty on the island of Taiwan. However, lacking a broad based appeal to the political concepts and mobilization mechanisms of all of the inhabitants of Taiwan, Lin Shuang-wen on his way south in a bid to attack the seat of government in Tainan met stubborn resistance, in defense of their city, from the people of Chuluo City in Chiayi, whose ancestral home was also Changchou City. The Hakka people on the basis of protecting their land and maintaining stability also came to the assistance of the Ching in suppressing the revolt. Lin Shuang-wen was eventually defeated and killed leaving behind only the place names “Shuang-wen Road” and the “Shuang-wen Tunnel”. Relative to the 1776 American War of Independence and the 1789 French Revolution from the same period and their respective establishment of an independent nation and a constitutional monarchy, which had historical implications for the history of the whole world, Lin Shuang-wen’s opposition to the Ching Dynasty was merely a primitive “revolt against official oppression”.

Ethnicity gradually blurred: A single family of Fukienese and Hakka

During the Ching Dynasty differences in the languages, customs and beliefs of the Hakka and Fukienese ethnic groups, and even between the distinctive Chang, and Chuan Fukienese, competition for economic resources together with the Ching government’s policy of “employing racial strife” led to the repeated outbreak of fighting along ethnic lines and even created a lasting stain on ethnic relations. Nevertheless, following the historical process of putting down deep roots and a “acclimatization” there emerged a phenomenon which is summed up as “a close first generation, a degree of separation in the second generation and a scattering of the third generation” and “Kinmen doesn’t acknowledge Tongan, Taiwan doesn’t acknowledge the mainland”. In 1884, at the end of the Ching Dynasty, French forces attacked Taiwan provoking a concerted effort to resist the French that didn’t discriminate between the Fukienese and Hakka. The folk saying, “Son’s of the West have come to attack our Taiwan, everybody unite to attack the barbarians (French)” characterizes the Taiwanese people’s shared hatred for the enemy.

After Japanese rule, an efficient administration, the establishment of an island-wide transportation system and the dissemination of language information helped to shape the island into a whole. At present, it is difficult to distinguish between the Chang and Chuan and many people are quite vague about their ethnic attributes. Over recent years, more and more Fukienese settlers have come to know that they have a “Hakka background” and it turns out that intermarriage between the Fukienese and the Hakka had long before created the single ethnic group of the “Halo”.

In 1949, roughly 1.5 million Mainland Chinese, from every province in China, migrated to Taiwan in what may be referred to as the largest immigration of the last century. These immigrants and their offspring have long been referred to as “Mainlanders”. Following the passage of history, this term has exhausted its appropriateness, especially with the demise of “province” in “The Provincial Government of Taiwan”, following the abolishment of the provincial government, and should be substituted with the term “new inhabitants” with its connotations of the evolving developments. The new inhabitants, because of differences in the period of immigration, place of origin, background, residential distribution, occupation and disposition between them and the early inhabitants in addition to the 228 incident and the situation of a long-term authoritarian political system, resulted in what is referred to as a province of origin problem. The problems associated with ethnic relations were concealed under the Kuomintang orchestrated illusion of a united people, however elements of ethnicity often, either under natural conditions or purposefully, have served the function of a mobilizing mechanism in political affairs.

The putting down of roots of the new inhabitants

That there are differences between the early inhabitants and new inhabitants is a natural phenomenon, but difference doesn’t predicate confrontation. Over half a century, the immigrants from different periods have shared the same living space on the island of Taiwan, received the same education, a 20 percent marriage rate between people who originated from different provinces in China, and especially because in immigrating to Taiwan the new inhabitants were similar to the Ching Dynasty inhabitants in that they were predominantly male and thus the “taro root sons (mainlanders)” and the “sweet potatoes (Taiwanese)” gave birth to “taro root-sweet potato hybrids” which is a remake of “there are mainland grandfathers but no mainland grandmothers”. The famous author Gabriel Garcia Marquez said, ” that if a person has no family buried on the land in which he lives then he is not someone who belongs to this land”. This is the best interpretation of a process of identification that encompasses a concept of from life to death. At present, calculated from the “first generation of Taiwanese” the new inhabitants are already entering the third generation. Looked at from the perspective of the acclimatization of three generations with deep roots, the new inhabitants are all Taiwanese.

Fusing of the ethnic groups: building a nation and a living environment of sustainable development

There are differences between the cultures of the original, early and new inhabitants and it is normal for ethnic factors to influence political mobilization, but these facts don’t prevent the forming of a single nation with a shared fate. At an early date, Chu Yi-kuei, in 1721, in the anti-Ching Dynasty incident, evoked hostility between the ethnic divisions on Taiwan which prompted Lan Ting-yuan, who came with the Ching troops, to make the following appeal to the Taiwanese: “you are settlers from places like Chang and Chuan, together in the remotest corner of the earth, settlers who have left your native homes driven out by poverty sharing the same pains and fortunate to live together in the same prefecture. It is appropriate that you feel great love and attachment to each other, so how is it that you allow animosity to come between you that leads to enmity and resentment and mutual theft and murder?” As a result, regardless of who among the Taiwanese was the first to come and the last to arrive, there should be mutual understanding and appreciation for the different ethnic languages and cultures. With the establishment of the recognition of the interdependence of the people who exist on this land a living environment and nation of sustainable development can be constructed.